Providing our community with fire protection and rescue services dedicated to the preservation of life, property and our mountain environment.

Fuels do not ignite readily from small firebrands although a more intense heat source, such as lightning, may start fires in duff or punky wood. Fires in open cured grasslands may burn freely a few hours after rain, but woods fires spread slowly by creeping or smoldering, and burn in irregular fingers. There is little danger of spotting.

Fires can start from most accidental causes but, with the exception of lightning fires in some areas, the number of starts is generally low. Fires in open cured grasslands will burn briskly and spread rapidly on windy days. Timber fires spread slowly to moderately fast. The average fire is of moderate intensity, although heavy concentrations of fuel, especially draped fuel, may burn hot. Short-distance spotting may occur, but is not persistent. Fires are not likely to become serious and control is relatively easy.

All fine dead fuels ignite readily and fires start easily from most causes. Unattended brush and campfires are likely to escape. Fires spread rapidly and short-distance spotting is common. High-intensity burning may develop on slopes or in concentrations of fine fuels. Fires may become serious and their control difficult unless they are attacked successfully while small.

Fires start easily from all causes and, immediately after ignition, spread rapidly and increase quickly in intensity. Spot fires are a constant danger. Fires burning in light fuels may quickly develop high intensity characteristics such as long-distance spotting and fire whirlwinds when they burn into heavier fuels.

Fires start quickly, spread furiously, and burn intensely. All fires are potentially serious. Development into high intensity burning will usually be faster and occur from smaller fires than in the very high fire danger class. Direct attack is rarely possible and may be dangerous except immediately after ignition. Fires that develop headway in heavy slash or in conifer stands may be unmanageable while the extreme burning condition lasts. Under these conditions the only effective and safe control action is on the flanks until the weather changes or the fuel supply lessens. 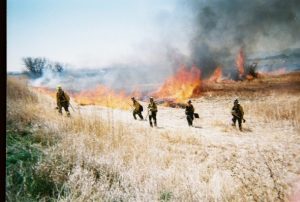 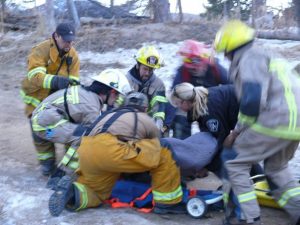 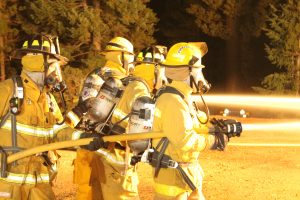 Coal Creek firefighters are extensively trained in firefighting, primarily to extinguish hazardous fires that threaten life, property, or the environment. Currently there are 35 active structure firefighters in Coal Creek Canyon. 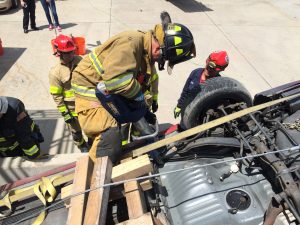 Coal Creek Canyon Fire Protection District (CCCFPD) is a Volunteer Fire Department within the Wildland/Urban Interface. Currently, 60 active members respond to emergencies in the three surrounding counties of Boulder, Gilpin, and Jefferson. CCCFPD is a rural area whose boundaries contain the following county, state, and portions of various recreation areas:

The District is home to 4,000 residents plus pass-through visitors. Although some of the residents live on large tracts of land, the bulk of the population resides in subdivisions with forested lots consisting of one acre or less. A rapid increase in residential growth has occurred in recent years, which enhances focus on the safety of homes and businesses.

The eastern portion of the District is a mixture of light and heavy industries, ranch and grazing lands, and some undeveloped portions of the City of Arvada. The upper canyon has rugged topography and thick forest.

CCCFPD and adjacent districts have significant wildland fire potential due to high hazard conditions such as: old growth fuels; large area; steep terrain; and, limited access. The District most recently faced a significant wildland fire in January 2006. The 2,700-acre Plainview fire, fueled by 70+ mph winds, took 4 days to extinguish. No lives or structures were lost.

Of our 224 miles of roadway, those in the upper canyon are winding and difficult to navigate especially at night and in winter months when ice and snowfalls are common. Ten percent of the roads in our District are paved, 85% are unpaved, and 5% are passable only with 4×4 vehicles. Two major state highways cross through our District; Highways 93 and 72.

A major railway, now used by several rail lines, was constructed on the heavily forested hillsides in the 1880’s and contains 25 tunnels within our District. The closing of Tennessee Pass has funneled increased rail traffic through the District. As many as 28 trains per day use the rail line, some carrying hazardous materials.

The Coal Creek Canyon Fire Protection District meets the challenges of our tri-county district from our four strategically positioned fire stations. We currently have: