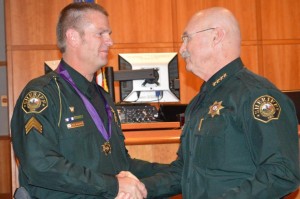 When the 2013 Coal Creek Flood effectively cut off Coal Creek Canyon, Sergeant Baldwin was one of two Canyonite officers to step up and serve the community above and beyond the call of duty. The Coal Creek Canyon Fire Department worked closely with him throughout those weeks and quickly learned to value his partnership, and appreciate the man.

Sergeant David Baldwin received the Sheriff’s Star award for supporting the Coal Creek Canyon community throughout the 2013 Coal Creek Flood. He was a dedicated friend to Coal Creek Canyon, and will be sorely missed, both professionally and personally.

Here is the text of the speech given at the award ceremony:

In September of 2013, Coal Creek Canyon suffered a devastating flood. During a span of two weeks, these two gentlemen logged over 177 hours of service to this area. As in most of these awards no one had to ask the Dave and Kerri to do the work we are going to talk about here, they just did it. Whether it was because they live in the Coal Creek community or from a sense of dedication to the job, both of the employees stepped up and gave an amazing effort.

Sergeant Baldwin is well versed and knowledgeable about nearly all things related to the sheriff’s office. Due to his skill set and natural ability, the sheriff’s office public information officers have complete confidence in his ability to conduct interviews, complete media tours, and instruct media on critical issues/situations, with little or no oversight. According to our PIO’s, his proven track record for compassion, understanding and professionalism makes their job easy.

As a resident in the Coal Creek Canyon area, Sergeant Baldwin took a leadership role by becoming the point of contact for Road and Bridge, the Incident Management Team, Emergency Operations Center, Colorado Department of Transportation, various fire and police departments and citizens alike. He provided timely and honest information to them and critical feedback to the Sheriff’s Office on the status in that community. He attended community meetings on his own time in efforts to be better informed and also to answer questions. He was described as a godsend, being the department’s eyes and ears on scene. Whether it was escorting citizens to retrieve their cars or giving ESPN a VIP tour of the area, no task was too big or too small. Locals tweeted about how lucky they are to have Sergeant Baldwin in the community and how much they appreciated his individualized service. Sgt Baldwin we are honored to present to you the Sheriff’s Star award.