The Highway 72 Fire was detected midday Labor Day, and was fully contained by 1500 (3PM) the same day by the work of 40 personnel from Coal Creek Fire and multiple supporting agencies. The fire reached a couple of acres in size up rocky terrain, torched a number of trees and was climbing up the hillside, with spot fires high overhead in the cliffs. (Embers thrown up from the burning trees carried fire to the cliffs.) 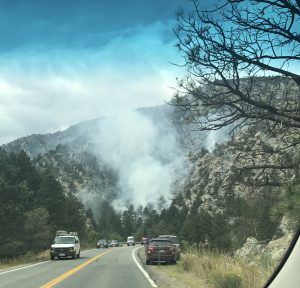 Initial scene of the Highway 72 Fire with significant smoke present.

The highway was closed while apparatus supplying water to the firefighters blocked the road, and then again while helicopter water bucket drops were provided. We were able to deploy multiple Type 1 and 2 (heavy) engines on this wildland fire, which is an uncommon occurrence and was a significant help.

Yesterday, the fire was checked several times by firefighters on the ground with no heat found. Additionally, we ordered and received a heat detection flight from the State of Colorado’s Multi-Mission Aircraft focusing on the cliffs above the fire perimeter where spot fires had been discovered during the burn period on Monday.