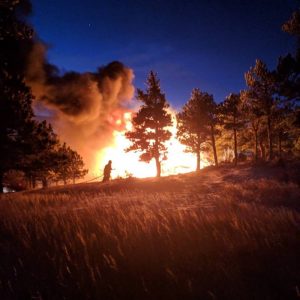 Station #3 is  located just beyond the railway tracks at the mouth of Blue Mountain Estates, allowing it to respond to emergencies even when the road is closed (blocked by a train.) Further, passenger trains explicitly stop at the crossing at Station #3 to receive medical care for passengers who fall ill on the train while in the mountains. Station #3 has a pre-planned landing zone for medical transport helicopters in Blue Mountain Estates (again, for when the tracks are blocked) as well as the more typically used landing zone at the parking area on Plainview Road.

Highway 93 is a major thoroughfare susceptible to extreme crosswinds, wind-blown snow patches refreezing to ice, snow blizzards themselves, and the general challenges of higher speeds. Motor vehicle accidents occur on all roads, but they occur with unfortunate regularity on Highway 93. Station #3 operates an engine and a rescue for response to motor vehicle accidents, and also for medical calls and structure / wildland fires.

Station #3’s primary response area experiences significant wildland fires, from single tree lightning strikes in the rocky areas at the mouth of the canyon, to illegal campfires left by travelers, even to multiple fires under East Ridge lit by a locomotive lacking spark arrestors. In January 2006 the 2,700 acre Plainview fire was fueled by 70+ mph winds and took 4 days to extinguish. No lives or structures were lost.

Station #3 run the gamut of incidents and has an experienced crew including a Paramedic & career firefighter, an EMT, and firefighters with many years of experience. Station #3 is home to the department’s Communications Officer (radio equipment) and Wildand Coordinator.

Station #3 has openings for volunteer firefighters. Deadline for applications is this coming Monday, November 26th.